31-year-old Kirsty decided to seek help and go through weight loss surgery due to infertility problems arising from being overweight, her body mass index before surgery was 44.5 kg/m2. A body mass index above 40 kg / m2 indicates obesity, which is a health hazard. The most well-known health problems caused by obesity are type II diabetes, hypertension, sleep apnoea, osteoarthritis, post-myocardial infarction, PCOS and female infertility. 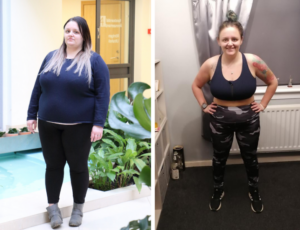 Kirsty opted for gastric sleeve surgery that took place in February 2020. In one year, she has lost 33 kg or 1/3 of her weight. Her initial weight was 100 kg and height 150 cm. Her body mass index has decreased from 44.4 to 30, which should significantly increase her chances of getting pregnant naturally, as well as the percentage of successful fertility treatment, should she need it.

Before planning to become pregnant, it is advisable to wait until your body weight has stabilised, which usually happens between 12 and 18 months.

Although the primary recommendation for people with body mass index over 40 is gastric bypass surgery, which allows for greater and more permanent weight loss in the case of a higher body mass index, the advantage of gastric sleeve surgery is the fact that food’s pathway through the gastrointestinal tract does not change and most of the necessary vitamins and minerals are absorbed from the daily diet even after the operation. Therefore, gastric sleeve surgery is a good choice for a young woman who is planning pregnancy in the future. There is certainly less anaemia and hypovitaminosis after gastric sleeve surgery (also during pregnancy), while long-term weight loss is somewhat less with gastric sleeve than with bypass surgery, especially with a higher body mass index (BMI over 40 kg / m2).
NB! However, vitamin replacement therapy is recommended after all bariatric surgeries.

During gastric sleeve surgery the volume of the stomach is reduced approximately 10 times (150 ml remains instead of 1500 ml). Food’s pathway in the gastrointestinal tract does not change. As a result of the operation, the amount of food consumed and the feeling of hunger are reduced, as the part of the stomach that produces the hunger hormone ghrelin has been removed.

If you have a certain plan to become pregnant after weight loss surgery, the choice of the type of surgery must be decided in cooperation with the surgeon. The choice depends on how much weight needs to be lost as well as on your comorbidities.

Facts about bariatric surgery in Estonia